Modernization of a 25-Ton Whiting Crane

Modernization of a 25-Ton Whiting Crane

Engineered Lifting recently received a request from a customer to provide a competitive bid to replace “a worn out” 10 year old Yale FEW model 25-ton hoist. Another prospective bidder told the customer that the trolley and hoist were “worn out”, and it would be better to replace the entire unit.  Engineered Lifting Systems took a different approach, looking first at more economical crane modernization rather than replacement. An inspection of the Yale 25-ton hoist gearbox showed that all of the gearing for the 10-year old hoist was in perfect shape. The unit is a 5-speed hoist with an Eddy Current brake control, and the hoist was very noisy.  With the hoist gearing in great condition, the noise had to be coming from something else?  A bad coupling on the motor shaft was identified as the noise maker. A worn coupling on the motor shaft was the noise maker. The yoke bearings were worn.  The 25-ton hoist gearbox was in great shape. The 25-ton hoist and trolley were brought to the floor for inspection and modernization. After 50 years of service, the old bridge controls were ready for replacement. The motor leads and other wiring shows the signs of many years of maintenance. Resistor banks were ready for replacement with modern crane controls.

Because of their reliability, control, and flexibility, Magnetek’s Electromotive controls were selected as the replacement of choice for the old 5-speed magnetic controls on the trolley and bridge. Since the 50–year old bridge enclosures were in great shape, we and the customer decided to use the old enclosures and conduit since we were removing most of the old wiring and controls anyway.During the hoist motor removal, everyone was shocked to see the method of termination for the 30-hp motor leads, just look at the picture above! This was corrected with wire lugs properly installed prior to re-assembly, and this was not the only wiring horror story seen, or fixed.A small dumpster full of wire was removed from the site, along with hundreds of pounds of old controls and resistors. The old crane control enclosures were reused, the wire plume, resistor banks were replaced with those shown below… State of the technology Magnetek Electromotive controls replaced a ton of outdated controls.

The noisy drive shaft yoke and coupling on the hoist drive train was replaced with a genuine Yale part, as were other assembly parts.  The old hoist rotor shaft was replaced, along with new motor bearings, brushes and springs installed by a very competent local motor shop. After testing, the motor was reinstalled. In 10 years of service at this customer’s location, the hoist apparently never had a proper oil change. The drain plug on the Yale FEW unit still had the factory paint on it! So the gearbox oil was drained, and as 7-1/2 gallons of fresh 85W-140 was poured into the gearbox, I thought I heard the gearbox make a big sigh of relief?  Maybe it was just my imagination. The hoist and trolley was re-installed on the crane, new controls mounted and terminated, clean-up was an on-going project, and the crane was load tested without any issues. The work was completed over a three day weekend, with only a minimal impact to the customer’s production, within budget, on time, and the customer now has a better crane ready to meet the future challenges of its service life, which could be many years yet.  These older Yale hoists were built to last. The repair of a hoist motor shaft on a hoist and trolley of this size is a big job to be sure, and when done completely requires the gearbox and motor be removed for inspection. So, the trolley had to be removed from the bridge and the work completed while the unit was on the floor. When we got the hoist and trolley on the floor, further inspection by Engineered Lifting Systems with agreement by the customer showed that some of the money saved to modernize rather than replace the hoist and trolley should be spent replacing the 50-year old Bridge controls, while removing excess controls, wiring and resistors. 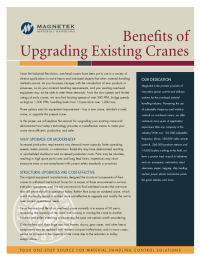 Download our Benefits of Upgrading Existing Cranes white paper in PDF and learn more about Magnetek’s complete range of systems for improving the performance and reliability of your cranes.